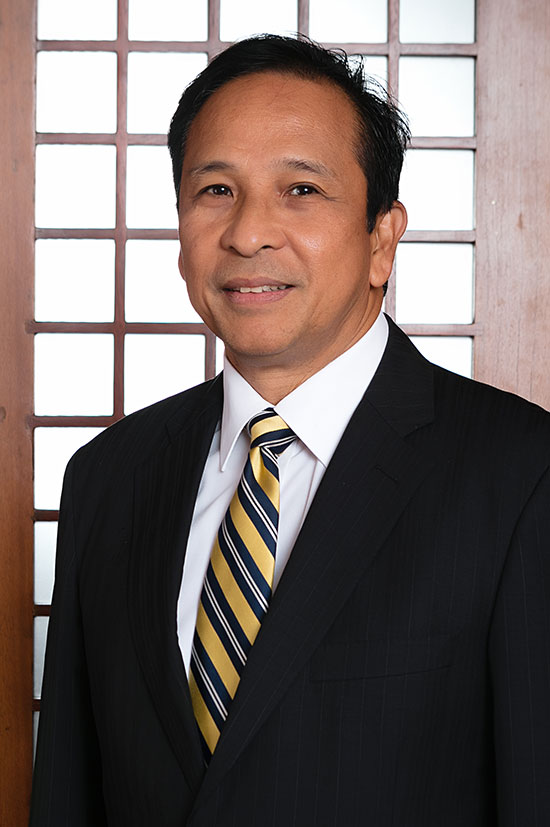 ATTY. CESAR L. VILLANUEVA re-joined in 01 July 2016 the Law Firm VILLANUEVA GABIONZA & DY immediately at the end of his tenure as Chairman & CEO of the GOVERNANCE COMMISSION FOR GOCCS (GCG), which is the government agency tasked to implement the objectives of R.A. No. 10149, otherwise known as the “GOCC Governance Act of 2011,” to act as the central advisory, monitoring, and oversight body with authority to formulate, implement and coordinate policies governing the GOCCs, GFIs and GCEs in the country. He was an original Founding Partner of VILLANUEVA GABIONZA & DY, 20/f 139 Corporate Center, 139 Valero Street, Salcedo Village, Makati City 1200, until his appointment to the GCG, which was a Cabinet-level rank.

On 05 May 2016, named as the first recipient of the Ambassador Cesar B. Bautista Award for Good Governance in recognition of the many achievements pioneered as the first Chairman of the Governance Commission for GOCCs (GCG), from the Institute of Corporate Directors (ICD).

On 23 June 2016, Secretary Villanueva was awarded the PRESIDENTIAL MEDAL OF MERIT by H.E. PRESIDENT BENIGNO S. AQUINO III at formal ceremonies held at Malacañan, for “outstanding, dedicated work and exceptional leadership as the Chairman of Governance Commission for GOCCs; for support of the administration’s platform of clean and honest governance; and for choosing to thread the straight and righteous path, in good service to the Filipino people.”

Secretary Villanueva was the Dean of the ATENEO DE MANILA LAW SCHOOL from 2004 to 2011, and remains a professorial lecturer in Corporation Law, Agency & Trusts, Partnerships & Joint Ventures, and Law on Sales. Shortly after his Law Deanship, he was awarded in November 2011 by the LEGAL EDUCATION BOARD with the first Outstanding Law Dean (Gold Category) for “a consummately impressive superintendence of the ATENEO DE MANILA UNIVERSITY LAW SCHOOL.”

Dean Villanueva was the Chairman of the Commercial Law Department of the PHILIPPINE JUDICIAL ACADEMY (PHILJA) of the Supreme Court, and was a member of its Academic Council.

He was a member of the Governing Board of the MANDATORY CONTINUING LEGAL EDUCATION (MCLE) of the Supreme Court. He was also a member of the Technical Panel for Legal Education of the COMMISSION OF HIGHER EDUCATION (CHED) from October 2005 to January 2010.

In 2011, he was appointed the Executive Secretary for the ADMINISTRATIVE TRIBUNAL of the ASIAN DEVELOPMENT BANK (ADB).

Dean Villanueva was a member of the Board of Directors of the Clark International Airport Corp. (CIAC), and the Redondo Peninsula Energy, Inc. (RP Energy), Chairman of the Board of Clark Development Corporation (CDC), a independent director of Makati Medical Center and the Redondo Peninsula Energy, Inc. before his appointment to GCG.

He was also a member of the Board of Trustees of the INSTITUTE OF CORPORATE DIRECTORS (ICD), of which he remains a Fellow. He is also a Fellow of the AUSTRALIAN INSTITUTE ON COMPANY DIRECTORS (AICD).

Dean Villanueva was a founding member and remains a member of the Board of Trustees of the KAPAMPANGAN DEVELOPMENT FOUNDATION (KDF).

On 11 December 2011, received the Most Outstanding Kapampangan Award from the Provincial Government of Pampanga.

He is author of leading legal books: Commentaries on the Revised Corporation Code, Commercial Law Review, Philippine Corporate Law, Agency & Trusts, Partnerships & Joint Ventures; Law on Sales; and Law and Practice on: PHILIPPINE CORPORATE GOVERNANCE, which received the 2009 National Book Award on Professions given by the NATIONAL BOOK DEVELOPMENT BOARD and the MANILA CRITICS CIRCLE.

Dean Villanueva has several published legal articles, which include: